SoFloPoJo
Poetry in South Florida - A Look Back 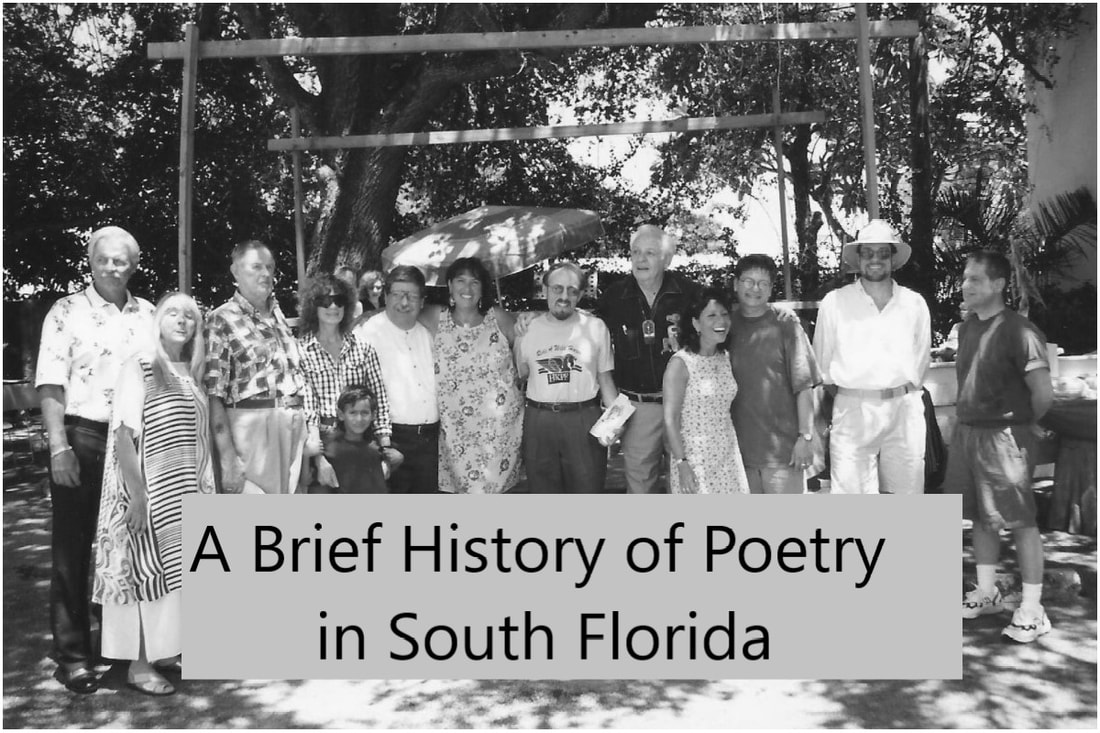 A Brief History of Poetry in South Florida

Some remarks by Marzi Kaplan in the introduction to The South Florida Poetry Institute’s Anniversary Anthology 1976-1986:

There were a total of 125 charter members of SFPI in 1986 and a mailing list of more than one thousand names. SFPI conducted an annual Seven Lively Arts Festival Poetry Contest and Program. Its poetry readings and workshops at Hollywood Art and Culture Center were attended by most of South Florida’s poets and anticipated the Miami book Fair, Palm Beach Poetry Festival and O, Miami.
After its first business meeting in 1976, SFPI, Kaplan says, hosted its first Guest Poet reading, Bette Sellers, from Young Harris, Georgia. The evening, she goes on to say, culminated in the signing of of our Charter…
Hollywood City Officials and members of the Board of the Art and Culture Center offered us a Poetry Browsing Room, an auditorium for poetry readings, a base of operations, a home; Broward Community College , through its  Community Service Program, offered to underwrite and advertise our workshops…
Having taught the first workshop, I was succeeded by gifted poets…Betty Owen, Hannah Kahn, Agnes Homan, Gilbert Maxwell, Dr. Luke Grande, Gloria McArthur, Ed Phillips, and Dr. Ann Peyton.
Even now as I write this recollection, I remember this night as if it were this night. The air was alive with exaltation and electricity; promises and potential; energy and enthusiasm. The coming together in an alliance of poetry pierced us with pleasure and love.
As the mind replays the tape of years, the voices and faces of dear friends and gifted poets who have since passed away come clear. Their memories, their poetry serve as blessings for those who followed. Their influence affected us. Their uniqueness can neither be duplicated nor forgotten.


A look back by Barbra Nightingale
​

In January, 1975, I knew no one connected to poetry. That changed in 1978 when I was working on my bachelor’s degree at Florida International University. I took a poetry writing class at Miami-Dade College, north campus.

I met someone who “adopted” me. Her name was Barbara Holley, the newly elected president of the South Florida Poetry Institute, located in the Art & Culture Center in Hollywood, Florida. She introduced me to a world of poets who gathered to read their work to each other, attended meetings, parties and workshops. They quickly became my best friends. And mentors.

Shortly after joining that group, I joined the Laramore Rader Poetry Group, which was founded by Vivian Laramore Rader, in 1931. She served as Florida’s Poet Laureate from 1931-1975. She died before I knew her, but her devoted friend, Frank Fitzgerald Bush carried on her meetings. To become a member, one had to take Frank’s formal poetry class, held at his home in Miami Lakes.
Mostly, the Rader group consisted of elderly women living in and around Miami. Sometimes we met for lunch at the Howard Johnson’s hotel and restaurant on Biscayne Boulevard in downtown Miami. I shuttled back and forth between the Rader group and South Florida Poetry Institute, and eventually became president for two terms at SFPI, which at some point merged with another poetry group, Poetry in a Pub, run by Kurt Dressler, editor of the monthly Florida Arts Gazette. The people who attended these groups and readings were the movers and shakers of the South Florida Poetry scene in the late 1970s and early 1980s.

It was also through Barbara Holley that I attended my first poetry convention—the National Poetry Federation, and in 1980 it happened to be in Orlando, Florida, where I met Richard Eberhardt, Florida’s Poet Laureate, Pat Lieb and Carol Schott.
In the early ‘80s I met Ann White, who taught contemporary poetry, and Shirley Stirnemann who would later take over as president of SFPI. That started me on my yearly pilgrimage to the Suncoast Writer’s Conference at University of South Florida, in St. Petersburg, where I met and invited to South Florida to read poets such as Lola Haskins, Carolyn Forche, Carolyne Wright and Sharon Olds.

In 1982, I started a cable TV show called Poetry & Conversation with Barbara Nightingale. It aired once a week. I went down to the studio in Hollywood to record each show with special guests from the above list of poets, and anyone else that might have been in town willing to be interviewed. Most of the Beta tapes have disappeared, but I managed to convert about a dozen onto DVD. It’s a joy to see and hear these friends and poets, most of whom, sadly, are gone.
Hannah Kahn died in 1998. She was a much loved and revered poet and friend, and a group of us, including Fred and Vivian Witkoff, founded The Hannah Kahn Poetry Foundation. Many of the people named here were on the Board of Directors. The Art & Culture Center closed, then moved, and SFPI disbanded. SFPI’s membership shifted to HKPF. Due to behests from some members, HKPF was able to invite prominent poets to South Florida to read and conduct workshops.

Eventually, I became HKPF’s president, and through the generosity of Broward College and the Knight Foundation, was able to keep bringing in poets to read at Broward College. In 2016, when I retired from teaching, HKPF closed its doors, but not before endowing the rest of its remaining funds for student scholarships in a creative writing poetry class.
Here it is, 2020, and the poetry scene in South Florida is still going strong: Palm Beach Poetry Festival, O, Miami are flourishing, and the Last Friday Night Poetry Series continues at Books and Books. The friends that I made through poetry, who are still alive and well, are still part of my e-family. We stay in touch sharing lives, poems, and love.


Barbra Nightingale has eight books of poetry, the most recent Alphalexia (2017, Finishing Lines Press), Two Voices, One Past from Yellowjacket Press, and Geometry of Dreams (WordTech).   More than 200 poems have appeared in journals and anthologies, including The Liberal Media Made Me Do It, City of Big Shoulders, Lummox Press, Through a Distant Lens, Calliope, Calyx, Mississippi Review, The Florida Review, The MacGuffin, Blue Light/Red Light, The Birmingham Review, Barrow Street, and Tigertail:  A Florida Annual.
Poems by South Florida poets no longer with us
Jim Azar,   Judith Berke,   Lili Bita,   Michael Earle Carlton,   Emma Crobaugh,   Lawrence Donovan,   Robert Gregory,  Barbara Holley,   Hannah Kahn,   Jeffrey Knapp,  Alice Lee,   Henry Logan,   Denis O'Donovan,   Magi Schwartz,   Doris Sutton,   Ann White,   Fred Witkoff
Lili Bita lived through the Nazi occupation of her native island, Zakynthos, the Greek civil war that followed, and much else.  The story is in her memoir, Sister of Darkness (Somerset Hall Press). Author, actress, and pianist, she had a career as a leading lady in Greece. She emigrated to the United States, where she performed widely with her one-woman shows, “The Greek Woman Through the Ages,” “Freedom of Death,” and “Body Light.”  She held several academic positions, offered master classes in the art of Greek drama at American universities from coast to coast, and traveled under the auspices of the Greek government as an ambassador of Hellenic culture.  The author of twenty books of poetry, fiction, memoir, and translation, Bita was inducted into the Hellenic Writers’ Association, the oldest and most prestigious literary academy in Greece, in recognition of her lifetime achievement.   Bita was born in Zakynthos, Greece.

Lili had a residence in Calcutta years ago, and her hosts, thinking she should see some of the real life of the city, took her a slum area.  She was stunned by what she saw.  A crowd had gathered for her, and she understood that she was expected to speak.  She said what she could, totally unprepared and still in shock.  Afterwards, a woman came up to her and said, “You know, Mother Theresa was here the other day.  But you’re much nicer.”​
​Born in New York City, Hannah Kahn was poetry editor of The Miami Herald for 15 years. She published more than 400 poems in such places as: American Scholar, Harper’s Magazine, Saturday Review, Southwest Review, Ladies Home Journal, McCalls and Saturday Evening Post.
Her two poetry collections, Eve’s Daughter and Time, Wait were well received and critically acclaimed. Each in turn, SoFloPoJo Associate Editor Barbra Nightingale, and Founder/Co-Publisher Lenny DellaRocca were President of the Hannah Kahn Poetry Foundation, established after MS. Kahn died.
Alice Lee

Originally published in The Lyric in 1978, and re-printed in Anthology One by Florida State Poets Association.
​Re-printed here with permission from FSPA.

They cling to each attenuated day
Like birds of autumn strung on beads of light,
Sloped shoulders nodding necklace heads of gray,
Eyes bright with souls already poised for flight.
They perch in rasping silence by each door,
Their taloned fingers grasping silver wheels,
Or tool themselves along the corridor,
Emitting non-communicative squeals,
But there are times when human voices rise
Above the cloud of aviary drone;
An anxious visitor with careful eyes
Searches for the face most like his own--
Yet hesitates, for fear that he may see
The spectral promise of his destiny.
​A word about Magi Schwartz by Barbra Nightingale

Magi Schwartz was a force unto herself. When I first met her, around 1980, she saw herself as my rival. I never knew that till a mutual friend told me something disturbing. Years later, on one of our annual trips to the Suncoast Writer's Conference, I finally asked her about it. She admitted it was true, but "that was before I knew you" she said. She and I got past all that, and became best friends. We did many things together, like running the South Florida Poetry Institute and the Hannah Kahn Poetry Foundation. There wasn't anything Magi wouldn't do for a friend. You needed something brought to Miami from Hollywood, Magi would do it. You needed something brought to Palm Beach, Magi would do it. She was indefatigable, even while dealing with Leukemia in her later years. I was with her when she died. Magi Schwartz was truly the sister of my heart and both a poetry devotee and a devoted poet. I miss her still, and talk to her in my head all the time.