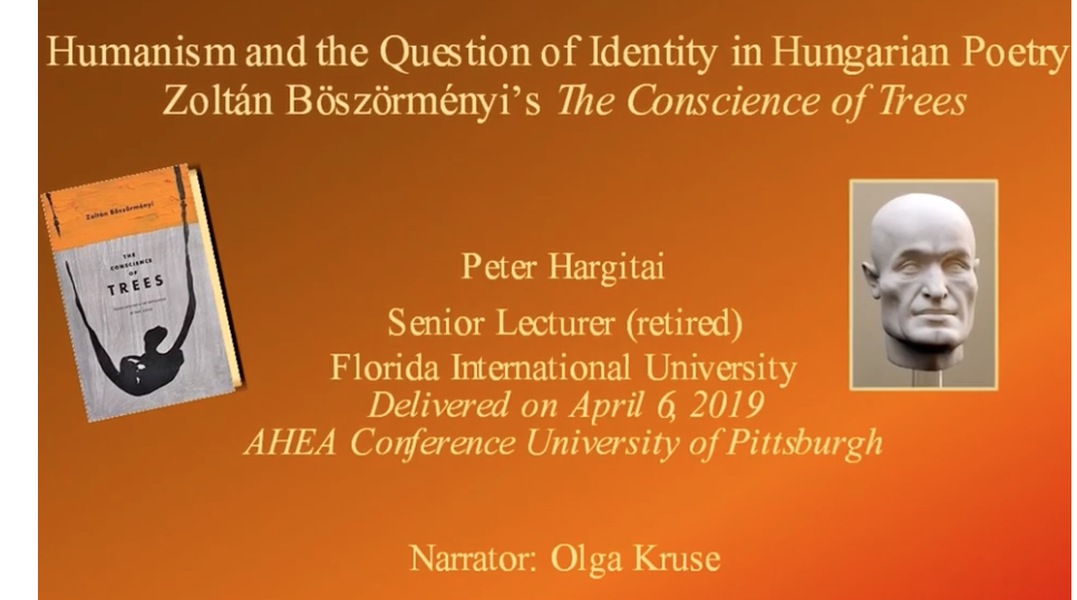 Peter Hargitai "addresses nationalism, xenophobia, homophobia, etc. and all the shit going on in the World According to Orban and Trump" in his eye-opening essay.
​https://www.youtube.com/watch?v=nLaSmb7wUV0

With efforts by the current administration in Washington to dismantle progressive policies affecting everything from civil rights and protection of the environment to immigration and refugee issues – not to mention attacks on a free and independent press, an independent judiciary, and the right to vote -- what more appropriate time to huddle with and see where leading American poets of conscience stand on these matters?

In this case, that process began at a gathering in San Antonio, Gemini Ink's 2018 Writing The New Century July 2018 conference. Close to the borderlands, which are in some ways at the heart of America’s current zero-tolerance immigration policies -- notorious and draconian practices that include forced family separations, internment of refugee children and blanket criminalization of the displaced, the asylum-seeker, and the refugee as a pretext.

San Antonio, only a few hours by car to the lower Rio Grande Valley (RGV), “rooted in its founding in New Spain, it give us another version of the American origin story, born out of Tenochtitlán rather than Plymouth Rock,” notes John Santos, who serves as Distinguished Scholar in Mestizo Cultural Studies to the Honors College at the University of Texas at San Antonio.

The Valley. Gloria Anzaldúa's herida abierta (open wound), where 'the third world grates against the first and bleeds'. But also where long cultural admixture has produced a vibrant new cultural consciousness. Not Mexican or American, but a new and sacred cultural entity— the mestizaje, a mix of ancestry and culture, distinct and rich in ways that render obsolete 'us vs. them' thinking. An indigenous consciousness that, with its notions of decolonization, resistance, identity and migration, flies in the face of the current administration's stoking of nationalist fears and ethnic mistrust in service of their power.

This is the borderlands that Anzaldua, throughout her major works, spoke of, seminally articulating a “borderlands identity.”

At the risk of stating what is fully understood by those who study the border situation or live it, it should be pointed out that the people of the border are distinct from the current flow of refugees and asylum-seekers coming from certain countries in Central America. They are a people whose home has been the Rio Grande Valley—characteristically both sides of it—for generations, a people for whom the border is an artificial construct created by distant nationalistic forces and enforced with the barrel of a gun. A border which crossed them.

Panel presentations, including Writing Resistance/Embodying Diversity and Carolina Cisneros-Hinojosa’s Writing as Liberative Praxis: A Latina Narrative, advanced important ideas on decolonization, diversity in an age of divisiveness, and speaking truth to power.

Presentations and panels are rewarding and necessary methods to promulgate the conversation among writers of conscience coming together anywhere in America, or for that matter beyond US borders, these days. And Gemini Ink's gathering in San Antonio was an estimable opportunity to enlarge that conversation.

But while the process began in San Antonio, my journey of learning ‘found its feet’ with a post-conference road trip to 'la frontera’—the lower Rio Grande Valley—with San Antonio poet laureate Octavio Quintanilla, to meet first hand with some 'on-the-ground' writers of the valley, and experience a little of the multi-layered, dynamic culture in which they work.

To the Valley itself, McAllen, Tx, and a few miles of riverside east and west, where ICE blimps float over the river, and groups like Poets Against Walls organize and rally to speak out against harsh border policies and reclaim the river as a community resource. Where immigration officials set up checkpoints to stop and examine the credentials of travelers on highways. Where local poets organize slams and children's writing anthologies, all in the English and Spanish mix that Anzaldúa hailed as a synthesis of Spanish and the Anglo- American influences, enabling the development of new terms in both.

The Rio Grande Valley, home to a people who first passed through in the 16th century, historically no stranger to terror or the capricious and violent use of power.

A world that Santos notes has been a destination and a platform for migrations for millennia-—indigenous first and later mestizo peoples—the borderlands as a homeland reaching from Mesoamerica to the American Southwest.

The core of the trip, aside from roaring rides up and back through mesquite and scrub, was a performance and poetry gathering at the historic Cine El Rey, in downtown McAllen, a colorful location for a diverse presentation of voices in and of itself, organized by McAllen poet laureate Edward Vidaurre—and the site of many political rallies of late—and as an arts venue.

Being a product of the Valley himself, Quintanilla knows his way around, and took pains to add into my experience some deeply revealing metaphors for the complexity of the border experience. Among them:

—a river crossing at Los Ebanos on the only hand-pulled ferryboat which still crosses the Rio Grande, but one—a quick peek, just downriver, at a bend in the Rio Grande where for years, another poet's father used to swim back and forth, regularly and unimpeded, to visit relatives;

—a second border crossing, by car this time, over an international bridge between Progreso and Nuevo Progreso—(the border guard at this bridge eyed me carefully, asked me my business in the area. When I told him I was reading poetry he went into his booth, checked me out on Google and with a broad smile wished me well, said he was sorry to have missed my reading, and waved us on);

—a visit to the Basilica of Our Lady of San Juan del Valle, but one of many indications of the deep and multifaceted spiritual underpinnings of border culture. The iconic characteristics of the Virgen as they attain functionality in border country is of particular note and are quite specific, notes San Antonio poet Natalia Treviño.

“The role of the sacred in this land has a material, not esoteric value,” she notes. “Guadalupe as the goddess is in the daily lives, the illnesses and the small triumphs of her people—never vengeful or jealous like Hera, not vain or petty like Venus, but a powerful whisperer who gets things done like nobody’s business.”

As I say, a lot to absorb. An understanding of border culture is way beyond a quick visit, or a several book deep reading of the literature of the region. The Valley's history and culture, its sister brotherhood, the intersectionality of gender with multi-layered ethnicities, is nuanced and rich beyond simplistic iteration or quick appraisal.

One example: Quintanilla has this year embarked on daily drawings of visual poems he terms FRONTEXTOS. In one he recently completed we see a triad of women figures iconic to the region—The Virgen of Guadalupe, Gloria Anzaldúa, and Selena. In creating this triad, Quintanilla compiles one group from among the diverse influences on border culture—the amalgamation of Aztec/Spanish religious traditions; the emergence of intellectual giants defining the border culture; and the palpable contributions of a pop culture icon whose meteoric career as the 'Queen of Tejano Music' is but one indication of the dynamism of culture which has emerged.

There are a lot of ways to look at a border. For a person like myself, looking in from the outside—from a privileged position in terms of race, gender, wealth and sexual orientation, and a goal to extend my voice in solidarity with those who live in and call the RGV their home —it is a flashpoint for a political and moral conflict that challenges our devotion to the cause of humanity.

For those who are living ‘the frontera,’ however, there would appear to be more of Anzaldúa's generative admixture at work than some might at first realize.

For sure, it is a complex admixture—the outrages committed against the Mestizo people who preceded what amounts to expropriation by settlement and takeover of the region by Anglo-America, are well documented.

That includes murder and theft by extra-judicial and extra-legal means, on the part of the Texas Rangers. Millions of acres stolen through unethical taxing methods and other expropriatory tactics of early 20th century ‘shoot first and hang the rest’ Anglo-Texan policies —brutal terror, violence and trickery as part of the border legacy.

Tales of such wild west justice are indicative that there are precedents to the current and hotly contested practices of the Department of Justice when it comes to the vicious separation of children from families as a way to control the oppressed. One of them, of course, is no further away than Américo Paredes’ seminal story "The Ballad of Gregorio Cortez," made into a popular film in 1982.

However, as Paredes astutely notes in his anthropological introduction to the ‘With his Pistol in his Hand,’ the 1958 book in which he has retold the Cortez story, there is in border culture a palpable capacity to ignore the overlay of dominant cultures to the north or south when it suits people.

The people of the border, he insists, have a capacity to 'simply ignore strangers, except when disturbed by violence or some other transgression of what he believed (is) 'the right'...the swirl of events and the coming and going of strangers (is) but froth on the surface of life."

Treviño sees this trait in how the people of the region have adapted to the sometimes difficult weather conditions, “the palpable heat and humidity—a presence that the border population deflects, with its righteous power, by late night life prepped by quiet afternoons— slowing down—to be ready to savor the night after a very hard sonofabitche day. (see Anzaldúa‘s poem ‘el sonofabitche’)

A border may be a river or it may be a wall. Sometimes you can get across it by wading, or on a ferryboat you can help pull across a narrow stretch of water. Maybe you have to pass over a bridge with a checkpoint to get somewhere to work for a living or go shopping, take care of your medical needs, or visit with a member of your family.

Giving voice to the conditions of living at ‘la frontera’ is more than confronting the fact that the place you live is, in a very real sense, a flashpoint of national contentions. It is a matter of affirming the rich, unitary, delicately nuanced character of the people you are from— people who live on both sides of the border—and adding your poetic voice to enunciate and interpret the daily experience of living in a place a border runs through.

Because on either side of the border at the Rio Grande, life goes on—lo cotidiano, an 'imperative concept toward understanding the liberation of the oppressed and the subjugated' as noted by San Antonio poet Carolina Cisneros-Hinojosa, referencing Mujerista Theologian Ada Maria Isasi-Díaz.

Or as Natalia Treviño put it, addressing the quotidian is an imperative, “a reminder to all poets and artists about our role to move stones—more important than ever in an age of concrete wall-builders—by our capacity to bind, become water, and sway.”

And particular, the poets of the RGV—not as Americans, or as Mexicans, but as citizens of this historically distinct, emergent, beautiful place. The lower Rio Grande Valley. Anzaldúa's borderlands.

George Wallace is editor of Poetrybay, author of 33 chapbooks of poetry, and writer in residence at the Walt Whitman Birthplace.